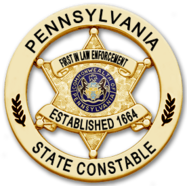 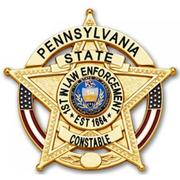 NOTE...This page is a "holdover" from my campaign website.  I think that the info contained is of great value (and honestly....I'm not sure how to delete it).

Note: the following description of the duties of a Pennsylvania State Constable was written by Pa. State Constable Joshua Stouch and has been reprinted with his permission. It has been edited for space.

If you reside in Pennsylvania, chances are you have seen them at one point in time in your travels or daily life; a ”Pa. State Constable”. But - who are they and what do they do? It is a question often asked of nearly every working Constable when they are encountered by members of the public, and even during encounters with other law enforcement or emergency services personnel.

Constables, in general, are the oldest law enforcement position in the world. In recorded history, records of Constables in France begin in 5th century, when they were known as the “Counts of the King’s Stables”. By the turn of the 6th century they were called the “Chief Household Officers”, and commanded the military in the King’s or Queen’s absence. Over the centuries, Constables served many positions within the military.

A Pennsylvania State Constable comes in two initial forms; a locally elected official, or a court-appointed official. Elected Constables serve a six-year term and are elected at a municipal level, though they are not under the command of their municipality, as they are classified as ”independent” officials, answerable to the Executive Branch of government.  Court-appointed Constables are appointed by a judge of the Court of Common Pleas in the county they reside in, and serve any length of term of up to six years at a time.  Appointments occur in two ways; a vacancy in a township or borough, or as ”Deputy Constables” appointed by the elected Constable in a municipality. Deputy Constables act at the pleasure of their primary Constable who appointed them, and they share the same legal authority of an elected Constable.

Once all this occurs, an elected or appointed Constable may choose to serve in one of two ways; as a ”certified” Constable or as an ”election day” Constable.  Both of these levels of service are of significant importance, but both are also completely different from one another, specifically in their authority and job description.

What is the difference between an Election Day Constable and a Certified Constable?

As an ”election day” Constable, the elected or appointed Constable serves as a peace-keeper at his or her election polling places in their township or borough during both the ”Primary” and ”General” elections. He or she is responsible for the overall general safety of the voters at each location and to assure that the election laws are followed accordingly. In fact (except for emergencies), Constables are the only law-enforcement officers authorized to be present at a polling place during voting, except for on-duty law enforcement coming in to exercise their right to vote.  A ”certified” Constable, an elected or appointed Constable may serve as the “law enforcement arm” of the courts system (primarily the Minor Judiciary system, known as the local courts). The Pennsylvania Commission on Crime and Delinquency (the PCCD), who also train and certify Deputy Sheriff's , and train and certify Constables under the Pennsylvania Act 49 of 2009. Initial training is 120 hours and includes firearms training.

So, what can a Certified Constable do? What is their authority?

As previously mentioned, an Act 49 certified Constable can choose to serve the court system in much the same way as a Deputy Sheriff serves. Constables may perform anyauthorized service to the courts. These authorized services include the following: service of arrest or bench warrants (ranging from summary offenses such as parking tickets to felony offenses such as murder), service of civil process, service and processing of execution orders and levies, service and processing of evictions, service of PFA and other court-orders such as subpoenas, providing of court-room security, and transportation of prisoners for various purposes (hearings, fingerprinting, etc).

A Constable also has “warrantless” arrest authority, meaning he or she may make a detention of an individual who has committed a breach of the peace or felony crime in their presence and upon their view. An example of this would be an individual assaulting another individual in plain view of the Constable.

A Constable sounds a lot like a municipal or state police officer; is there a difference?

YES - there is a difference. A Constable may NOT enforce any provisions of the vehicle code, and they may NOT perform criminal investigations, which municipal and state police are authorized to do. For example, the neighbor of a Constable cannot contact him to investigate a burglary that was just discovered or to investigate vandalism to their vehicle.

Also, in general, Constables do not respond to emergency 9-1-1 calls, although many Constables do provide various types of law-enforcement related assistance to their local or state police agencies in many areas of the state. Many Constables provide back-up to their local agencies or provide crucial services at emergency scenes, such as traffic control and scene security.  A Constable, however, is most certainly, both by definition and by law, considered as a “Law Enforcement Officer”, and maintains much of the same type of ”police authority” that their brothers and sisters in municipal or state police departments have while performing their court duties, such as the service of arrest warrants.

How are Constables compensated or paid?

A Constable only gets paid for services they perform. They do not maintain a salary. Constables are paid in two ways; by the “plaintiff” in a civil action, and by a “defendant” in a criminal action. Fees paid to a Constable are regulated by Act 49 of 2009 and are collected by the judiciary and, generally, paid to the Constable by the county financial controller. The Constable does not usually get paid by taxpayer monies (except in special circumstances), and are not considered employees of any municipality, county or state.  Additionally, Constables must provide for and pay for their own health and life insurance, professionally liability insurance (similar to that of a police department), and provide for their own equipment such as uniforms, duty equipment, and transport vehicles and related equipment.

What Kind of Constable Will Don Benn Be?

To begin with.....I'll be a FULL TIME Constable.  I will have NO OTHER outside paid job or occupation (but I certainly will continue with my volunteer work).  I will dedicate my time and energy to serving the Courts and the Community (and unlike others will NOT seek to monetize my badge or office).  Make NO MISTAKE ABOUT IT....it is perfectly legal and lawful (and common) for Constables to use their office to enrich themselves through the performance of private service.  Doing so falls into the category of ​"Lawful but Awful"  and that's not how I roll.  My term in office will be dedicated to public service...and nothing else.  ​If you are aware of another candidate who can or has made that promise they certainly deserve your full consideration.

I want to thank Constable Stouch for allowing me to reprint his excellent descriptive article.