"Let us not seek the Republican answer or the Democratic answer, but the right answer." 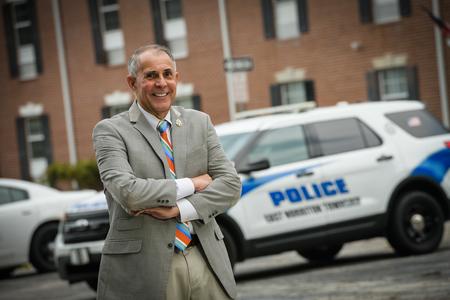 MY TERM OF OFFICE BEGINS ON

​January 1, 2022 (but since I don't go to CONSTABLE ACADEMY until March I don't have anything new to say!

I’m Don Benn and I am your next Constable.  Truth be told, while I've always respected the office (and the many men and women who have occupied it), up until this year I never had any desire to assume the responsibilities of a Pennsylvania State Constable.   I am a former  Judge of Elections and DEPUTY CONSTABLE and was VERY, VERY happy supporting the man who currently holds the job.

THEN CAME THE EVENTS OF JANUARY 6th...and an aftermath that showed that way too many of "the tourists" "who were there for a "love-fest" were current or former members of the armed forces, elected officials, or law-enforcement officers.  I saw criminality, brutality, gullibility, and a tribal/pack mentality that both repulsed and frightened me (and at this point in my life not a whole heck of a lot frightens me).

It was then and there (and why) I decided that the best way that I could insure that there would be (at least) one less hate-speech spewing "domestic terrorist" with a badge and gun was to fully back our current Constable in his re-election bid.  Then... he informed me that he was retiring...and strongly suggested that I ought to run for, win, and occupy a spot that might have otherwise have gone to a less qualified candidate.

So there is no confusion.... prior to the events of January 6th, I was a registered non-partisan voter (and very happy to stay far, far away from partisan politics).  I had been active in local politics for almost a decade but said goodbye to partisan nonsense in 2016.  Having been approached by members of both parties to run as "their guy" (I live in a small town and all of the "players", including me, know and, for the most part, like each other).  When I became convinced that no other equally qualified individual (of either party) wanted or would perform the job as I believe it should be done, and with the full support of the current Constable and the (almost) full support of my wife, I changed my registration, rearranged my personal and professional commitments (for the next 6 years), threw my "hat into the ring"...and that brings us up to today.

Now back to my least favorite subject...... "A little Bit More About Me"

I’m a native Pennsylvanian, born and raised in Philadelphia for the first 45 years of my life and have resided in Montgomery County for the past 24 years – the last 16 spent right here in East Norriton.  I’m a product of the Philadelphia Public School system and a graduate of Northeast (Public) High School (class of 1970).  Just a small sample of my post-high school education includes:

Bottom Line – if you’re from the area (and old enough to ride the bus for free) we might have gone to school together.  And, if you're younger, I just might have been one of your teachers.

My “not-so-formal” education (and admittedly, I’m “cherry picking”) includes:  The Philadelphia Police Academy, The FBI’s Citizens Academy (both Quantico, Ft. Dix, and Philadelphia), The Federal Law Enforcement Training Center, The Montgomery County Public Safety Academy; The Pennsylvania State Fire Academy; and the Pennsylvania Minor Judiciary Board (where for the past decade I was certified to be a Magisterial District Judge).

In 2005 I received my Private Detective’s License (from Montgomery County) and have maintained both a solo practice (with a focus on Human Trafficking and Domestic Abuse) as well as working (both on my feet and behind a desk) for two of the largest security and investigative companies in the county.  I am also a Notary Public and an ordained Wedding Officiant.

I’m still married (to wife #1).   We have two “kids” (in their 30’s), three grandkids (#3 waited until a few days after I won the election to show up), and a total of three dogs (all rescues). The rest of my private life is, uh, private (so please don’t believe any of the stories you might hear about me…and  certainly feel free to question any of the stories you hear from ​me).

Other interesting (if I say so myself) “tidbits”:  I was a public-school teacher for 8 years (teaching Special Education, Driver’s Education, and serving as a "Home and School Visitor" (the official name for a Truant Officer).

Here in East Norriton Township I’m known and respected for my many years as a Judge of Elections, serving on our township’s Industrial Development Authority, being the founding Chairperson and longest serving member of our township’s Human Relations Commission, my years of volunteer work with Laurel House (as a Domestic Violence Prevention Advocate), my volunteer work at Paul V. Fly Elementary School, and as a recipient of East Norriton Township's Distinguished Citizen of the Year award.  And, oh yeah, as I mentioned earlier,...I'm a former Deputy Pennsylvania State Constable.

County-wide I’m best known for my past work with Variety Club, The Montgomery County Anti-Human Trafficking Commission, my time as a Member of the Sheriff’s Advisory Committee, my work with the Montgomery County Chapter of the American Cancer Association, and my work with Shriner’s Hospital (where I serve as a “Sheppard” – one of the men who drive and escort  children and their families to the hospital).

I will be using my lifetime of education, experience, and expertise in my new eole as your next Pennsylvania State Constable (2022-2028).

This webpage was updated by me on December 2, 2021 (imagine how professional it would look if I had a budget).